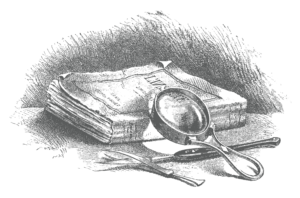 Let’s say you sit down to read a new mystery novel. You crack open the cover, flip to the first page, and just as you’re about to read the first line, your (soon-to-be-former) friend comes over and says,

“The butler did it.”

Why does that drive us nuts? And more importantly, why does it make us want to stop reading?

After all, in both cases you, the reader, have a question you want answered, “Whodunit?,” and in both cases, you get that answer, “The butler.”

But in one case you’re told the answer (gee thanks, “friend”). In the other, you’re shown it, and often well before you’re told (even if you don’t realize you’ve been shown it at the time).

So much of the fun of a mystery (or any story, really), lies in the questioning of every character, every detail. “Is that important?” “What does that mean?” “Am I right?” It’s seeing if you can solve the murder at least at the same time Sherlock or Miss Marple does, if not slightly before.

It’s those questions that keep you turning the pages long after you should have turned out the light and gone to bed.

That can’t happen, though, if you already know the answer. If you already know the butler did it, you end up observing the story, not living it. Sure, you might appreciate the deft way in which a clue was introduced or feel superior that a character missed the OMG-so-obvious clue (which is only obvious to you because you know why it matters, because, you know, the butler).

But when you don’t know the answer — you’ve just stumbled across the body in the basement — you end up looking at everything, examining everything, imagining what will happen next. And because you’re experiencing everything at the same time the characters do, you enter the story. It becomes yours. The author, very subtly, has brought you, the reader, into the story. You’re there.

More importantly, you want to stay there until the end. Until you know the answer. Until you’ve discovered it yourself.

And you, my friend, are no different from your audience.

But be honest: When was the last time you couldn’t put down… an essay? Or scientific paper? Aren’t the stories (or the comics or the movies) waaaaaay more interesting?

So instead of starting your presentation with the answer (“The butler did it”), start it with a question — a question your audience wants to know the answer to (“Whodunit?”). Give them a problem to help solve. Reveal the truths and facts that need more examination. Let them live it, not just look at it. Show them, don’t just tell them.

When you bring them into the story, and they’ll want to stay in it — all the way to the end.

But watch out for that butler. He’s a killer.