“People don’t buy what you do, they buy why you do it.”

“Haters aren’t your problem. Ignoring them is.”

“You can’t change what you do until you change how you see.”

What do those three phrases have in common?

Directly or indirectly, they all suggest an action that achieves a goal.

Oh, and they all have words.

But that’s the kicker. How do you find the words that capture your big idea? 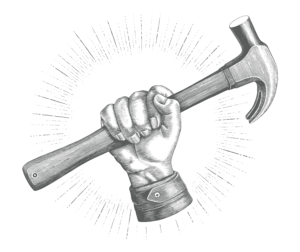 Have you ever had the experience where someone asked you what your idea was? Or what your presentation was about? And then, that beautiful idea — so crisp and clean and clear in your head — turns into some kind of vomitous mass (figurative, hopefully) as soon as it leaves your mouth?

Sucks, doesn’t it? Because then you start wondering about your idea. Maybe it’s not as great as you thought. I mean, shouldn’t a great idea just obviously be great? Shouldn’t its greatness just shine through?

It can, but there’s this funny relationship between words and ideas. We’d like to think they’re separate:

But you also have words you use to describe the idea to yourself. Those words are how you came up with the idea in the first place:

And it’s the second set that’s often the trickiest.

See, when you’re talking to yourself (as they say all geniuses do… so you go, you genius!), it’s like talking to an old friend. You have a secret language. Words that you know mean way more than just the word itself. Your words have history to you. Meaning to you.

So when you think about your idea, it always makes sense to you.
To other people? Not so much.

Unless, that is, you use words other people understand and agree with. Unless you translate your words into theirs.

Thankfully, there’s a “secret decoder” ring for words and ideas that can help you do just that: proverbs. Proverbs are the English-to-English dictionary for ideas.

And lucky for you, my friend Ron Ploof just wrote a book to help you build them yourself (and no, that’s not an affiliate link. I just want you to buy the book).

As Ron says, proverbs are the “tiny phrases that change the world.” They’re how we’ve transferred wisdom from author to audience for literally thousands of years. For you as a message maker, they’re the “foundational phrases” or “tweetable moments” from your talk or book.

They capture someone’s Big Idea. They’re short (tweetable, even!).  They’re clear. They’re memorable, so they’re easy to repeat. Directly or indirectly, they all suggest an action that achieves a goal. (Sound familiar? Yeah, all three phrases at the top of this post are proverbs, too. There are at least two others in this post, as well. Can you spot them?)

They’re the Red Thread Statements I work with my clients to create.

When you use a proverb to capture your big idea, you’re doing two things, one for you, and one for the audience. For you, you’re making sure you are as clear on your idea as you think you are (and trust me, if you can’t get your idea into a proverb, it’s not clear enough yet). For the audience, you’re giving them a powerful way of remembering your idea, and more importantly, repeating it to themselves or others.

That’s why you need Ron’s book: because he tells you how to construct your own proverbs. He gives you a process (and I love a good process) for finding the words that capture your big idea. And. It. Works.

My messaging and my presentations have all been built using what I’ve learned from Ron over the two years he’s been working on this book. I had the ideas, but he gave me the tools to find the words those ideas require.

So, if you want the effect of proverbs, you need The Proverb Effect.