One of the things that’s most different about these past few weeks is how much we’ve had to meet, and present, virtually. While we may know, or sense, that the biggest enemy of virtual presentations is your multitasking (on the part of your audience), often our focus is on minimizing that multitasking, it helps to understand the role our senses play in that.

Remember actually being in a meeting, or at a conference? All of your senses — touch, taste, smell, hearing — all experienced the same thing: “I’m at an event.” Even the incidental experiences, like the scratchy fire-retardant fabric of the chairs and the carbtastic snacks in the hallway, said, “You’re in a different place, doing a different thing. Pay attention.”

But now? Those senses are split. Your audience sees something that reads to their brains as something like “cat video” or “something I have to watch for work.” The smells, tastes, and sounds are mostly familiar ones — of home.

And that makes the “off” sound… you. You don’t “belong.” But rather than pay more attention (as humans are usually wired to do), your audience pays less attention. Why? Because the majority of their senses are saying, “You’re home, you’re safe, carry on.” And so their attention wanders to the things that matter more to them in the moment, which is usually anything BUT you.

So, what to do? Well, rather than try to battle multitasking (you can’t), my experience is that the answers lie in leaning into it: maximize the multisensory. Engage as many of your audience’s senses as possible so you tip the sensory scales from “You’re home, you’re safe, carry on,” over to “You may be in the same place, but this is is a different thing. Pay attention.” You can’t do anything about smell or taste, but you can maximize your message across sight, sound, and touch.

How? Well, here’s a quick checklist (most links are affiliate links, fyi, and thanks to the sudden rush on these kinds of things, many of these are currently out of stock):

To capture their EYES: 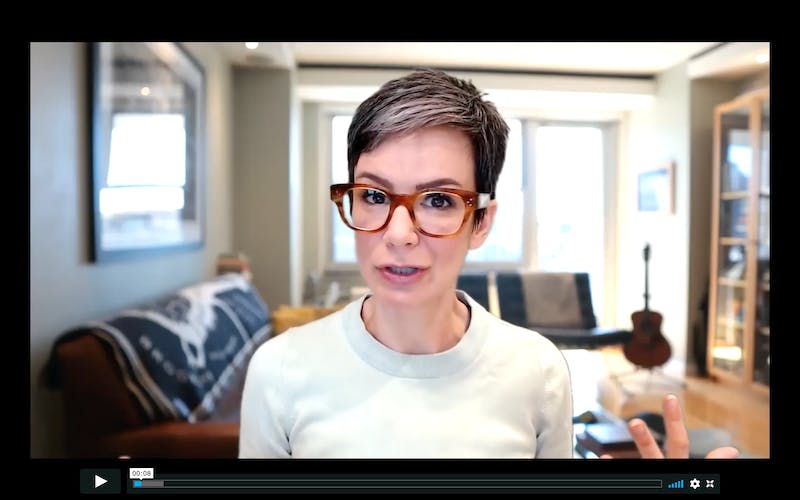 The only light I’m using is from the window that’s now in front of me, though it looks like it’s behind! If you’re wondering how I blurred the background to look like it would with a fancy camera: you can either take a blurry picture, or use a photo editing software (I like Acorn — way cheaper than Photoshop!) to add a “bokeh blur” filter. Either can help recreate the depth of field you lose with a green screen or virtual background.

To capture their EARS:

To capture their HANDS:

Want even more detail? My husband Tom and I went deep on this on the latest episode of The Freenoter, so you can get your fill (and Tom’s different perspective) there.

Presenting from home? Engage your audience's senses to tip them from 'You're home, carry on,' to 'You may be in the same place, but pay attention. Click To Tweet