It’s probably the question I get the most, “What IS the Red Thread?” The answer is both simple, and not. The simple answer is to talk about how there are “red threads” in just about every culture, religion, and philosophy. Even then, it gets complicated pretty quickly. After all, when someone says, the “red thread” they could be referring to any of them.

But, as I talk about in my refresh of my first-ever Find the Red Thread video, there are three particular “red threads” you might find useful, including the one that led to the Red Thread® (mine!): 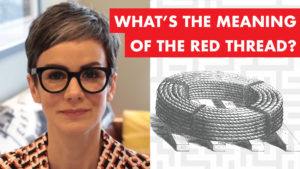 THE RED THREAD OF FATE

What it is: In certain Eastern philosophies, the “red thread of fate” (or sometimes, the “red thread of destiny”) refers to an invisible red thread that connects you with others. Some believe it ties you to your romantic soul mate. Others apply that connection more broadly, like between a child and their adoptive parents. Either way, people believe that the thread “may stretch or tangle,” but it never breaks.

What it is: Our next red thread, also known as the “rogue’s yarn” finds its roots in the golden age of sailing. Think tall ships and pirates, and you’ll start to picture the kind of rogue we’re talking about: those that would steal highly valuable rope for their own ships. To deter that kind of theft, or to identify the owner of the rope after it was recovered, they started to insert a colored thread to mark it as their own. Most famously, the British Royal Navy chose red for their rogue’s yarns (Goethe even wrote about it in 1809), and another red thread metaphor was born.

How you can use it: As a career brand strategist (not to mention fan of pirates — AAARGH!), this particular “differentiation” red thread holds a special place in my heart. I love the idea that you can make your ideas so aligned with what or who you are that even the smallest piece of them can still be recognized as yours. The best way to do that? Root your ideas, and your case for them, in your unique combination of wants, perspectives, and beliefs, which is your Red Thread®.

What it is: This last red thread is “the” red thread that inspired the name of my Red Thread® approach. In Swedish and other Nordic and European countries, the expression “red thread” refers to the core idea or theme of something. They talk about is as the “throughline” that makes it all make sense.

The Swedish “red thread” gets its name from the ancient Greek legend of Theseus and the Minotaur, a monster. As the story goes, Theseus had to kill the Minotaur to save his city. But to do that, Theseus first had to navigate a maze — the Labyrinth where the Minotaur lived. Yet no one, not even the Minotaur, had ever escaped it. But Theseus did. A woman named Ariadne gave Theseus a red thread to trace his path to the monster. He then retraced his path on his way out.

How you can use it: Ariadne’s red thread shows up in all sorts of ways. I see interior designers refer to the “red thread” of a particular space or room — the connecting elements. Some academics use it to refer to the “line of argument” in a dissertation or thesis. It’s in this “make things make sense” use that all the red threads I’ve talked about so far twine together. Your idea — your product, your brand, your business — has a red thread, too. It’s why your idea makes sense to you. When you can make it make sense to other people, they’ll see the “red thread,” too.

But how do you find it? That’s what I wanted to know. And then I realized: like Theseus, you need to retrace your steps. You need to follow the mental path you took to reach your idea. That mental path led you from a question you wanted answered, to seeing a problem in perspective that others didn’t, through a moment of truth rooted in your beliefs, to a crystal clear answer that would change your thinking and actions forever. It’s the path that everyone takes to make sense of the world.

It’s this universal, but unique, mental path that turned into the Red Thread® method. It’s what will help you find the case for your idea (Ariadne!), rooted in your distinct point of view (rogue’s yarn!), so you can serve the people you want and need to serve (red thread of fate). If you’re a regular reader, you know the path well:

So, that’s my answer to the question I get the most. The question I like to ask the most, though, is the one I want to ask you now:

What is the meaning of the red thread? I figured it was time for an update of my original video, so here we are with episode 101 of Find The Red Thread. I’m your host, Tamsen Webster of tamsenwebster.com.

What is the red thread? Well, there are red threads in almost every major religion and philosophy around the world. And three of the main explanations of the red thread are particularly useful for you, not just personally, but for how you think about and talk about what you do as well. And that’s why I call my process, The Red Thread, and so perhaps this will help shed some light.

So red thread explanation number one is the red thread of Eastern philosophy. In that belief system, when someone’s born, there is a red thread that is tied to them, an invisible red thread that connects them to the people they are destined to meet and be connected to in their lives. Now, some folks take this as being a connection between parent and child. Others think about it as soulmates and still others just think of it more generally, is it those people that you’re meant to be connected to in some way. So that’s the personal application, but for me, there’s a business application too. And one of the reasons why I love the concept of the red thread is that it’s anchored in the people that you’re meant to serve. So the red thread of you, of your business, of your idea, is connected to other people. And the red thread is a way to do that, it’s the connection between your answer, which is your idea, and a question that the people you serve are asking.

There’s a second red thread that also comes into play. And this one has its roots in the history of the British Royal Navy. In this case, the red thread goes by another name. It’s sometimes known as the Rogue’s Yarn. Now, back in the early days of shipping and sailing, rope was a pretty important thing. It was how they got the sales up and it was also a pretty valuable commodity. And that meant that people like to steal it a lot, and so the British Royal Navy, not wanting to have the rope stolen, or at least if it was, wanting to be able to recover it, did something special with the rope.

And what they did was they twined in it, so when they were creating the rope, they wove into it a piece of, you guessed it, red thread with the idea that no matter what piece, big or small, short or long, of rope was found, if it had that red thread in it, it was identifiably the property of the British Royal Navy. Now I love that because I think all of us want to have something about us and what we do both personally and professionally, that is identifiably ours. And so this second meaning of the red thread is connected to how can you make sure that whatever you do is remarkable to what and who you’re serving. So how can you make sure that that red thread that connects the people you serve, kind of that first red thread, how can you make sure that it’s differentiated, it’s different, it’s yours and that’s the British Royal Navy Rogue’s Yarn red thread.

Red thread number three comes from a Greek mythology. But before I explain that, let me explain how red thread number three is usually used because it’s the red thread that I work with most often. Now it’s usually used as an idiom in Nordic, like Swedish, German cultures. And they use it to say, “What is the thing that makes this make sense? What’s the theme? What’s the through line? What’s the sequence of concepts or ideas that create an argument for something?” And that adaptation you see a little bit in other areas in other industries where for instance, interior designers will talk about the red thread of a room. What’s the theme that kind of pulls it together. And you’ll hear people talk about finding the red thread of a thesis or an academic paper or something like that.

But ultimately what it’s about is this, this idea of what makes things make sense. Now, why is it called the red thread though? Well, in this case, as I mentioned, it comes from Greek mythology and the Greek mythology in this case is the story of Theseus and the Minotaur. So the minotaur was a monster, half man, half bull, and it lives in a labyrinth that was so complicated that nobody, even the minotaur, could escape. But in order to defeat the Minotaur, what Theseus needed to do, in order to save a city, he had to figure out a way to defeat the maze as well. So when he went into the maze, took with him a sword, but also a ball of red thread.

And he used that red thread to trace his path from the beginning of the maze, to the monster. And the reason why I love this image of this red thread that guides you when you don’t know where you’re going, is that a lot of times when we’re trying to figure out what is it that brought us to a certain place? So personally, how did we get here from where we started and professionally, how is it that we arrived at an idea? That process that Theseus went through is still a really valid one. We need to retrace our steps, we need to understand how we went from not knowing how to do a thing, to doing a thing, to needing to slay the monster and actually having done it. So that’s why the red thread that I talk about is this retracing of the steps from a question you asked, or your company asks once upon a time to the answer that ultimately is what serves your audience and as remarkable as well.

So that’s the three big red threads and how they tie into my red thread. And my question to you is what’s yours? I’m Tamsen Webster of tamsenwebster.com and this was Find The Red Thread.