Ignaz Semmelweis had solved a mystery. And it drove him insane. 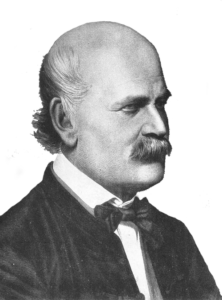 To keep patient levels even, the wards admit women on alternate days. But the levels aren’t even, and for two reasons. First, women are doing everything possible to avoid one of the wards (like having their children in the street) … and they’re doing it because of the second reason: One in five women doesn’t make it out alive. In the other ward? Only one in 50.

The most common cause of death is something known as “childbed” or puerperal fever. But what’s causing the fever in the first place? And why is one of the wards so much deadlier than the other?

That was the mystery.
Especially since women were dying more often in the doctors’ ward.

But then one of Semmelweis’s fellow (male) doctors dies, too… of the same fever. And I assure you, the doctor hadn’t just given birth.

No, a few days earlier, Semmelweis’ friend had accidentally cut his hand with a scalpel while performing an autopsy. And only the doctors performed autopsies.

Semmelweis had his idea: maybe the doctors themselves were spreading childbed fever, and spreading it from the dead to the living.

This was 50 years before germ theory and the discovery of the role of germs and bacteria in infection and disease. So while Semmelweis didn’t know why, he knew who. 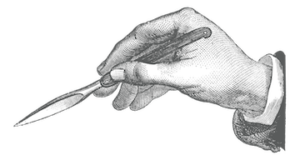 As an experiment, Semmelweis suggested the doctors start washing their hands after working with the autopsied cadavers. We know today the wash they used would have disinfected the doctors’ hands, killing the bacteria infecting the women. But at the time, Semmelweis only knew it removed the smell and the “cadaverous particles” he thought produced the smell in the first place.

And the mortality rate in the maternity ward drops by 90%. The same level as the midwives’.

But that’s not the end of the story.

The other doctors don’t believe him. They reject his idea, and eventually, him. They fire him. The doctors stop washing their hands. The mortality rates go back up. Semmelweis literally goes insane.

Within two weeks of being committed to an asylum, he dies of sepsis. A blood infection. Basically, childbed fever. (I swear, you can’t make this stuff up.)

But not even 10 years later, there’s a very different result in a very similar situation.

In this case, it’s a woman, a nurse. And instead of caring for women in maternity wards, she’s caring for soldiers injured in the Crimean War.

And now the mortality rates are much, much higher. But not in battle. After it.

Nine out of 10 soldiers in her hospital are dying from typhus, typhoid, and dysentery — things we know now are associated with germs. Bacteria. “Cadaverous particles.”

Like Semmelweis, she doesn’t know about germs, but she has the same theory about hand-washing.

And where Semmelweis fails, this woman, this nurse, succeeds. She not only convinces the doctors to do it (and keep doing it), she’s directly credited with reducing mortality rates… and creating the foundations for modern nursing. “She” is Florence Nightingale.

So, why did Semmelweis fail and Nightingale succeed? They both had the data, and on the surface, he should have had more credibility than she. He was a doctor and a male in the mid-1800s. She was a woman. A nurse. In the mid-1800s.

But the difference, as you may have guessed, is this: it wasn’t the what (hand-washing) or even the why (since neither really knew). It was the how. How they tried to create the change they were looking for. 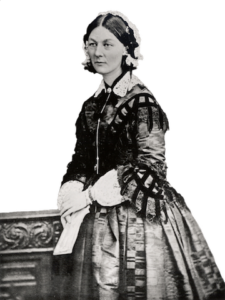 When people talk about Semmelweis today, it’s usually in the context of the “Semmelweis reflex”: when we reject new information simply because it conflicts with what we believe to be true.

And that was his mistake – he attacked his colleagues, and their worldview, head on. He identified the doctors as the problem.

But Nightingale focused on the environment – a common enemy.

Hers? “Soldiers are dying. And we can save them.”

And in that simple shift lies a critical lesson for all of us trying to create the messages that create sustainable change: The audience is the hero. They have to be. Otherwise, you’re just driving action, not change.