I blame my boys for the last two weeks.

I mean, it’s a good thing, but still. It’s totally their fault I’ve been spending the last two weeks teaching myself how to solve a Rubik’s Cube. 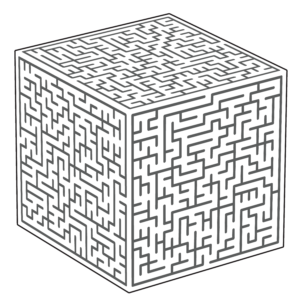 Now, you may be saying to yourself, “Um…Tamsen, isn’t that something you should have figured out 30 years ago?” And the answer is, yes, yes it is.

When Rubik’s Cubes first hit it big, I TOTALLY CHEATED. And I don’t even mean I looked up the answers somewhere. We couldn’t. The Internet didn’t exist back then. It was 1980. We only had books. Now get off my lawn.

So aside from going to a store (!), buying a giant book (!), and following along, (or, you know, actually learning to do it), the only way I knew how to solve a Rubik’s Cube was to move the colored stickers around or to take it apart. And that’s how I “solved” it. Seriously.

But two weeks ago my sons and I were at one of our favorite restaurants, where, as a treat to keep them occupied, the host came over with two mini Rubik’s Cubes. The colors were all wrong (purple instead of white, pink instead of red) and they were cheap knockoffs, but they still worked the same way: a 3×3 cube with different colors on each of the faces.

Of course, the first thing my boys did were to mess them up, which, of course, meant we had to solve them.

And thus my two-week obsession began.

The cube itself hasn’t changed much since they achieved fad-status in 1980. The official colors and the mechanics of the cube are the same. The stickers that I remember on my 1980 cube have now been replaced with inlaid plastic (and thus eliminated one option on how to solve it… harrumph). The cubes also move a lot more smoothly than they did then.

The thing that’s changed the most is how to solve it. Those books you had to buy 30 years ago (and I did), were BIG. They were big because they were conditional. It was a lot of “if this, then that.” You had to match your messed up cube face to the one in the book, and then follow a series of movements to get one color block to move. Just. One. Block.

I couldn’t do anything without the book.

In those thirty years, though, a lot of obsessed people started to figure out, not just the mechanics, but the patterns of solving it. Not just how to make single steps to get single color blocks to move, but an entire, thoroughly optimized six-step process for how to solve it, quickly, every time… without a book, or without even the very-convenient instructions on Rubik’s own website. (Kids have it so easy these days…).

The steps are straightforward. Solve for the “white cross,” then the white corners, then the middle row. That gets you two solved rows. To get the final row, you solve for the yellow cross, then the yellow face. Finally, you move the yellow corners and the middles into their correct places (all while keeping the bottom two rows solved).

This process may not make you the winner of a Rubik’s Cube Competition (which exist, by the way). And it’s almost guaranteed to be more moves than the “God Number,” the minimum possible number of moves to solve a messed-up cube (which is 20, by the way — and a great addition to your #swipefile).

But if you learn the moves of each step, you WILL be able to solve it, every time.

So I set out to learn the process, even if just to show 10-year-old me (and my 8- and 10-year-old sons!) that I could conquer something that I hadn’t been able to before. Also, hey! I got a blog post out of it.

Speaking of which, what does this any of this have to do with you? At one level, it could be a call to arms to any of you who, like me, spent 30 years mad at a plastic toy. Go solve that thing! (The site is actually very helpful.)

At another level, it’s a lesson in what your idea needs to be successful.

See, any great idea is, at its heart, a new solution to an old puzzle. That’s powerful. Once you’ve found that solution, because you’re good people, you want to give other people that same power. You want to save them all the time and trouble you went through.

You want to say, “Hey! You have that puzzle? I had that puzzle! Look, here’s how to solve it!”

But when you do that you leave something out, because between a puzzle and its solution lies a process. The path you took to solve it.

That path is important because that path gave you power. A very specific kind of power, in fact: “agency.” The power to do it yourself. All the steps you took to figure out the solution.

Obviously, you want to save people some of that time and trouble, and you can… and that’s where process comes back in.

Because once you’ve experienced the whole thing, you can start to simplify it — just like the process for solving a Rubik’s Cube went from book-length, to six steps on a website (and a variable number of moves), to the God Number and only 20 moves.

Different people, different audiences, will want and need different things. If I only wanted to solve the puzzle once, I might be fine with the old mix-and-match pictures from 30 years ago. If I only wanted to win competitions, I would need to understand at a very deep (and frankly, algorithmic) level how the cube works so I can take it from any state to solved in no more than 20 moves.

So I started with the process that Rubik’s provided… and then I learned it. I made sure that I didn’t just recognize the steps in each stage, I made myself actually recall them without looking.

The difference between recognition and recall, by the way, is the difference between looking at a solution and learning it. Learning doesn’t happen unless you can recall — and apply — information without assistance. Ask anyone who, after looking at their notes, thinks they have a talk memorized, but once the notes have fallen to the floor in disarray cannot string two sentences together….

For me to get to that point of “no-looking recall,” I developed my process for the Rubik’s process: I would do one step over and over again until I could do it without looking at the solution. Once I got one step mastered, I would go on to the next one, but I wouldn’t go on to solve the whole cube, because that would be trying to put too many steps into my head at once. I’d either forget them or go back to looking (and thus “recognizing”) the solution.

No, instead, I’d solve the cube through to the steps I’d mastered, then mess it up and try to solve to the next step until I got that one mastered, too. I kept doing that until I could do all the steps without looking at the Rubik’s solution.

10-year-old me is very proud: I now can solve the whole dang thing from any messed-up state. So yes, GO ME.

More importantly, my sons are very impressed (and that’s worth a lot, trust me). They love messing up the cube for me now to watch me solve it.

But most importantly, now that I have a process for learning the process of solving, I can teach that — and thus a repeatable way to get to the solution — to them.

And that, since you were probably starting to wonder, is where this once again comes back to you.

If you really want to help people, to help them solve the big puzzles they face, you have to give people the steps to figuring out the solution ON THEIR OWN. So they can have agency — so they can understand the thinking, not just the thing.

It’s a process anyone can follow. It may not be the God Number of persuasion (or puzzle-solving), but it will work, repeatably, to get someone to see the world in a different way. To solve an old puzzle a different way. Or your way.

Now, what puzzles are you trying to solve? What’s your process? I’d love to know.