If you’re trying to figure out how to make your message really resonate with your audience and drive action, take a minute to do these two things:

But that presents another challenge.

Not everyone in your audience (whether it’s five or 500) is equally aware of the “real” problem as you see it (your answer to #1, above), nor is everyone equally ready to act on that real problem. So, just like you can’t tailor a shirt to fit everyone in the room, you can’t craft a message that fits everyone, either. Trust me, I know you want to, but you can’t. Your message will be too shapeless, too diffuse to break through.

In order for your message to be clear enough to resonate, in order for it to be sharp enough to fit, you have to design it for a particular audience within your audience.

How? Enter the “Audience Design Diamond.” Even if you don’t know and love baseball, you likely know how a baseball diamond is set up, right? Imagine a square, sitting on one of the points. At the bottom is “Home,” and that’s where all the players want to get, because that’s where you score a point. To the right is First base, at the top is Second, at the left is Third. Players have to touch all three bases to reach Home.

In this metaphor, Home is the big shift in thinking or behavior you want your audience to adopt. It’s your solution. Home is the audience agreeing with and acting on that Change.

The audience is your team, and you are the manager (the coach) of the team. Just like in baseball, your job is to help the audience, through your messaging, score.

Whenever you address an audience (whether in writing or in person), the bases are “loaded,” meaning that there are audience members on each of the three bases. While in baseball only one person can be on base at a time, with your audience, you’ll have groups of people at each base. Those groups don’t have to be equally sized, and probably aren’t.

Each of the bases represents a different level of awareness and readiness for action:

Standing at First Base are audience members who are UNAWARE of the “real” problem as you see it (your answer to #1, above), and UNAWARE of your solution or the approach it represents.

At Second Base are audience members who are AWARE of the “real” problem as you see it (even if they’re not fully aware of the details), and UNAWARE of your solution or the approach it represents.

At Third Base are audience members who are AWARE of the “real” problem as you see it, and AWARE of your solution or the approach it represents. 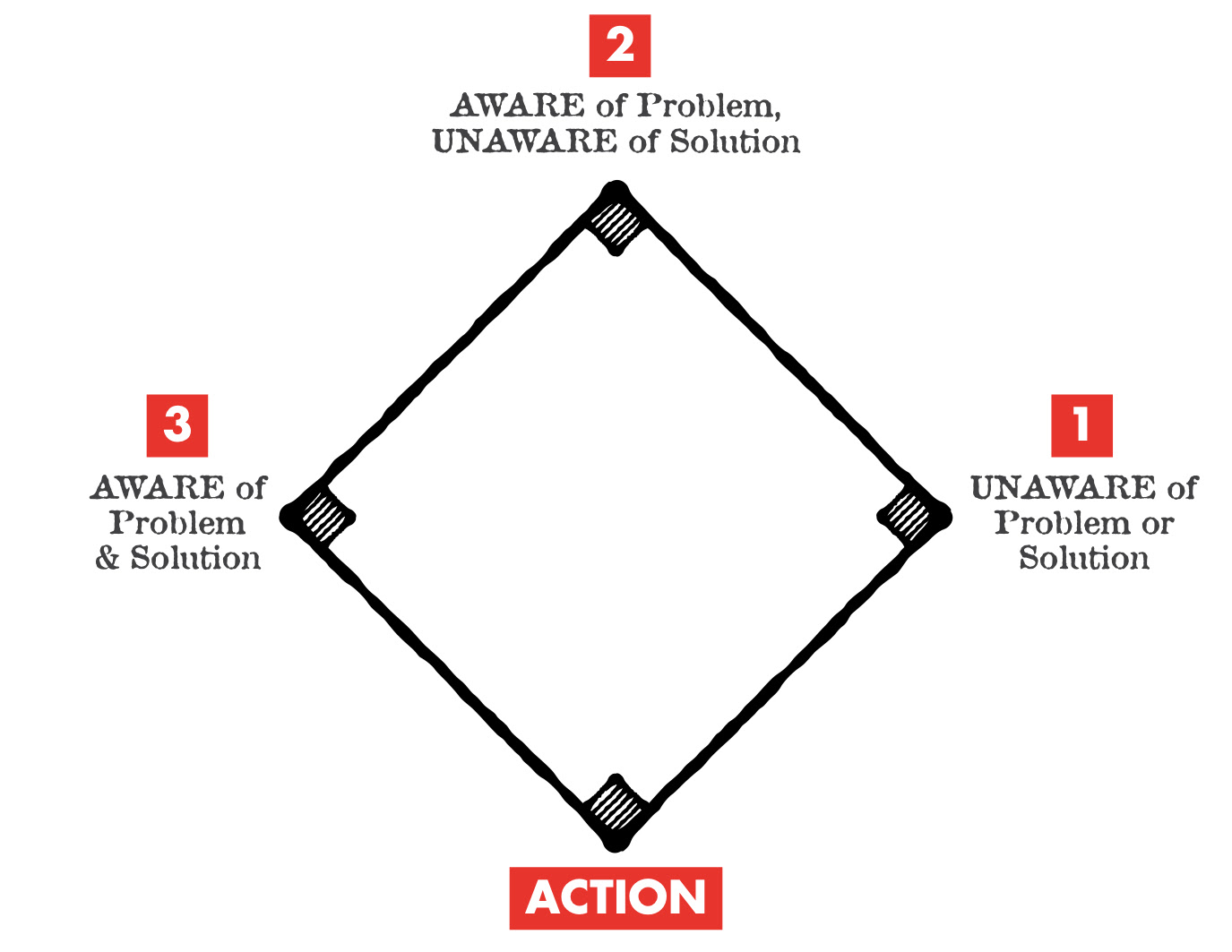 Let’s say, for instance, that you’re me, and you want people to use the Red Thread® to develop their messages. A First Base question would be something like, “How can I get people to act on my ideas?” They don’t yet know that there may be an issue with the case they’ve built, nor that I have a solution that may work for them.

A Second Base question would be something like, “How can I build the best case for my ideas (…so that people are more likely to act on them)?” That person is already AWARE that they need to make a more effective case, but is UNAWARE of a key part of the solution: you can’t just build any (or your) case for an idea, you have to build the audience’s case for the idea (which is what the Red Thread® helps you do).

But here’s the thing: you can only pick one “runner,” one question, to focus your message on. If you try to talk to all of them at once — answer three questions at once — the audience will get confused (literally) and no one will go anywhere. Remember what I said earlier: to make your message clear enough to resonate (and thus drive action), you have to design it for a particular audience within your audience.

Notice what I did above, though: see how each base’s question builds on the one(s) before? That means, even if you focus on the Third base folks (like I’m doing with this newsletter this week!), you still have an opportunity to loop the earlier “bases” in.

That’s part of the reason this question — also known as the Goal Statement of the Red Thread® — is so key to include early, in some form, in your written or spoken message: it helps the audience “base runners” know where you’re starting, and how it relates to where they are.

And as you’ve probably already guessed, your job is to use your message to move the audience you choose along the “base path.”

Soon, I’ll talk about how far you can actually move your audience in any given message (hint: a “Grand Slam,” where you get all the runners home, is as rare in messaging as it is in baseball!). I’ll also talk about what “type” of message you’ll be building, given which base runner you choose.

In order for your message to be clear enough to resonate, in order for it to be sharp enough to fit, you have to design it for a particular audience within your audience. Click To Tweet