Sometimes what’s missing from a message is… just about everything you need to make sense of it. But how, and why, does that happen?

You may have heard of something called the Curse of Knowledge. It’s a well known cognitive bias that says that once you know a thing it’s nearly impossible to imagine what it’s like not to know it. (The authors Chip and Dan Heath provide a spectacular explanation in their book Made To Stick, which is a must-have for message-makers.) 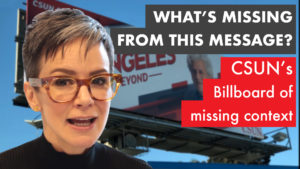 So how do you fix it? As I say in the video, context. If you know (1) who your message is for and (2) what you want people to do as a result of it, you’re much more likely to craft your message with enough context for it to make external sense.

But there’s one other thing you can rely on: story structure. For reasons we’ve talked about before, story structure itself provides context. That “automatic” context comes from aligning your message with how the brain naturally makes sense of information.

So let’s take a look at what that is. This was the billboard I saw elevating Los Angeles and beyond. So it says upper in this upper left corner, you can say it says CSUN.EDU/RISE and then we’ve got this picture of this guy and it says co-founder Rhino Records chairman Shout Factory Richard Foos who has a BA in sociology and then the CSUN thing at the bottom. Okay. Now I admit that I am not living in Los Angeles and if I were living in Los Angeles, then I might just know by magical osmosis that CSUN is California State University, Northridge. But I only knew that because this billboard bothered me so much because I had no idea.

Now think about this. If you don’t know that this is California State University, Northridge, what’s missing from this message is all kinds of context elevating Los Angeles and beyond. Who is that guy or whatever CSUN is and who is that guy? So co-founder Rhino Records, chairman Shout Factory Richard Foos and I’m so glad that he founded those things and it’s awesome and I am sure that California State University, Northridge is super proud of its alumni. I’m so glad, but I got to wonder like what is it? Who is this billboard for? What are they hoping people will do as a result? This is one of those things I don’t understand and it hurts me because I spent so many years in higher education that this could not have been inexpensive for them to either have designed or put up.

So I really want to figure out how we could make something like this as strong as possible for an organization that probably doesn’t have a huge amount of resources to spare. So the very first thing, even if it’s just an image or just an ad, is to have a sense for yourself of what is it that this ad is supposed to do? Is this supposed be something that makes people want to go to CSUN to support? Do they just want people to know about it? Because I can’t actually match any clear outcome to the copy that’s on this. Now I can kind of guess that they’re like, “Whoa, the action is to go to CSUN.EDU/RISE.”

Also, are you asking me to go or are you suggesting that I am someone who would be able to do that? So just a little bit more context, just I want to know what that’s all about. I can kind of get away. Even if we said California State University, Northridge, elevating Los Angeles and beyond and we just had Richard, I think we could probably get a sense of like, “Oh, that’s a guy I know.” Maybe, I don’t know Los Angeles very well and I think he’s important to Los Angeles and Hey look, he went to this university. So awesome, thanks.

I still would love there to be just something that makes a little bit more sense and I get that it’s a billboard and you can’t put a lot of text on it. I just wonder if there’s some missed opportunities here. If they’re looking for people to attend, then I think that the headline could be a little bit different. I still think you’ve got to tell people it’s a university because the EDU is really enough to tell people, I don’t know that this is a college. The school that I can go to, this could be a professor at that university. I don’t know. So if we’re asking people to go, then we need to make sure that the headline is a way for you to do like make an impact on your community. Go to California State University, Northridge.

You see there’s just these little missed opportunities that could take these elements and just make them strong enough for people to go, “Oh, I understand. And I do.” And to have made this investment really pay off for them in a different way. I mean I doubt that they’re advertising on a billboard to get people to get money. Maybe it’s an awareness campaign, but still, if it’s an awareness campaign, your acronym is not enough. It just isn’t. So okay, we’re going to do them an extra little favor and I’m going to actually go to the website that you’re supposed to go to even though I think we could just say what’s missing from this message from this billboard is enough. So let’s go over there. Now we’re on the website that you go to, okay.

And I say CSUN still don’t know where it is. I don’t. So I have maybe seen your billboard and gone to see said that CSUN.EDU/RISE and this is what I see and I still don’t know at the top but it’s California State University, Northridge. You’re asking me to read here before I see it. And you know what? Can’t see it because it’s white on a white background and there’s people behind it and it’s hard. CSUN I want to love this. I do. All right. The best place in LA to see stars rise. That’s great. First thing I noticed is the guy, I saw on my billboard isn’t here. Come on.

All right, but let’s read it just to see what they were trying to do. I want to help [inaudible 00:08:00] where individuals rise and take all of LA with them. Hundreds of millions of dollars are pumped back into the region’s economy annually from the Valley. CSUN, it makes a world of difference radiating through our region and beyond. Oh, like that play on words CSUN, pretty cool. Rise at one of the best universities in California. Oh, they want you to go. All right. All right. All right. So explore CSUNs impact throughout our region.

Okay. You just said that you want me to go and now you’re talking about you, but you’re not talking about what it solves for me. Okay. Number one, oh, these things move. I mean, it’s a beautifully designed site and I’m sure that there was… Oh Lordy. Okay, so I’m hoping that these various people rotate. There we go. And that the different folks perhaps are on the billboards that come through. Oh, there’s Richard, there’s my guy, but he’s not on the top one. All right. Oh, there’s a new message. When you invest in us, we invest in us all. Oh Nope. Yep partner putting a primary stick by investing in us what I’m really confused. Right? So I have no idea. So now I’m thinking this is actually a fundraising message, because that’s what it’s all kind of shaping up to with the impact stuff.

Leading maker of economic. No, now it’s back to students. Okay. So my friends, what can make your message stronger is context and its context, not just for your audience but that context starts with you. The context that needs to be present when you’re putting a message out there in any form billboard, website has to be, what is it and why should I care? You have to make sure that you are answering it very least those elements. Like who are you, California state university, Northridge? What do you want me to do? And what I suspect as often can happen is when a resource constrained organization has an opportunity to put a big campaign out there, they’re trying to make it do everything all at once and unfortunately by trying to make it do everything all at once, you get a very mixed context and what you ended up with is something that doesn’t provide any context at all.

Really not unless people are already familiar with the acronym, they’re already familiar with Richard Foos and they’re already familiar with relationship that all of those things have together. So what would make this message stronger and what can make your message stronger is making those decisions early before you ever put any kind of words on anything in before you put it on a website, before you put it on a billboard. Who is this for? Is this for prospective students? Is this for the Los Angeles community? Is this prospective donors, is this for prospective faculty? You do need to choose a primary audience. Who is it for? What do you want them to do as a result of this message? And then everything, everything that you write and build should be about doing that thing for those people. Making sure that the message is clear to those people that’s the thing that you want them to do.

Anything else that is off of that initial does not belong, and that is painful when you have a rare opportunity to make a big splash. But if you’ve got that chance to make the big splash, make sure you make it pay off. And that comes to making sure that context isn’t missing from your message. Thanks so much in absentia to California State University, Northridge for not directly sending me there, short form content, but if you have short form content, you want me to take a look at and find what’s missing from your message and how to make it stronger. Sending that to Red Thread Me at tamsenwebster.com. I of course am Tamsen Webster of tamsenwebster.com. If you liked this episode, please like and subscribe. See you next time.