You know your idea needs attention to survive. But sometimes, despite your best efforts, you just can’t seem to get the attention you need. The answer to why may lie in a seriously cool piece of research I discovered last week.

Let me show you the graph that caught my attention: 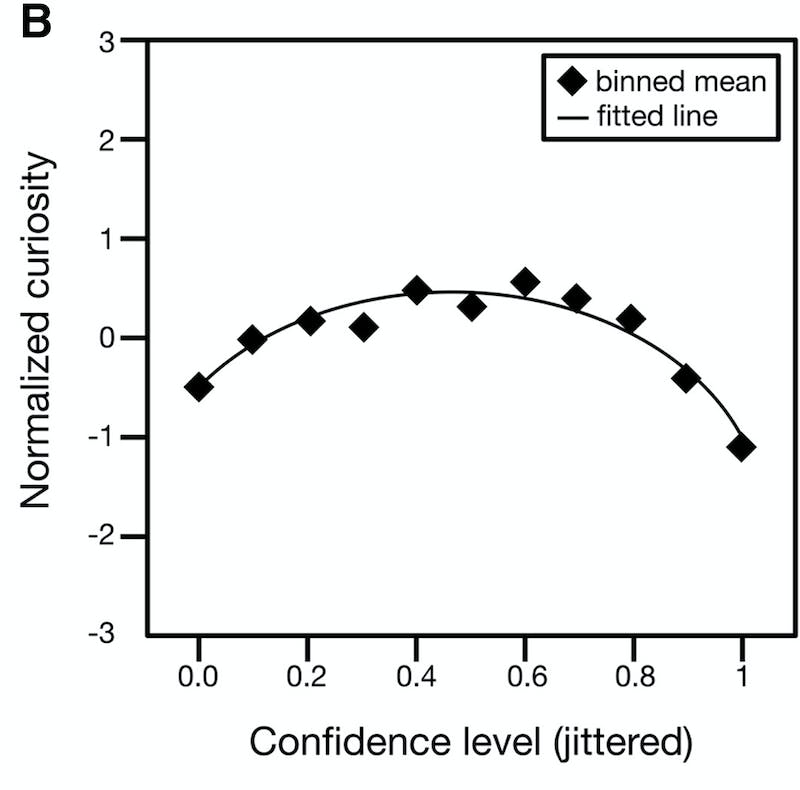 Okay, so what are you looking at? Well, the graph visualizes a finding that curiosity about the answer to a question is a “U-shaped function of confidence about knowing that answer.” Those with the least—and most!—perceived expertise on a topic were the least curious about learning more.

Go back and look at the graph. The x-axis is confidence level: how confident people were in their current level of knowledge of something. Lower levels of confidence are on the left, higher levels are on the right. On the y-axis is curiosity about knowing the answer to a question. The levels of curiosity rise as you go up the axis.

Notice what happens: if someone feels like they don’t know anything about something, they’re not very curious about it. This is why making your message “interesting” isn’t enough. If your message doesn’t seem to relate to something people want to know about already, it doesn’t matter how different or intriguing you think it is, you’re not going to magically get them interested.

For example, if I’m talking to a group of people who have never heard of me or my Red Thread® method, anchoring my message in a question like, “How do you find your Red Thread?” isn’t going to work. They don’t know anything about what I’m talking about and are unlikely to be curious to know more.

Beware, there’s danger on the other end of the graph, too: when someone feels like they know a lot about something already, they’re not curious to learn more. And why should they? They already consider themselves expert!

If I’m talking to a group of marketing, branding, and content experts, for example, an anchor like, “What’s a positioning statement?” is also not going to work, because that group of people likely already knows and could probably write equal or better content on that topic themselves.

What should you do to get attention? Find the magic middle of the curiosity curve: Make sure your message is anchored in something your audience already wants… but doesn’t yet have... (For example: “How can you make your ideas irresistible?”)

To create, and keep, curiosity, you need to give people something that they want, via a means they don’t expect. Or to put it in what I call the “Irresistible Idea Formula“:

Curiosity is critical when it comes to getting attention for your ideas. Researchers believe curiosity is what’s known as a “drive state,” like hunger. When you give someone a little bit of new information on something they know and care about, you create a “curiosity gap” — the gap between something someone knows and something they want to know.

And your brain can’t stand that kind of gap. (Neither can your audience!) Curiosity creates an urgent, intrinsic need to know more…a need that won’t go away until it’s satisfied, until the question is adequately answered. As an old saying goes, “An open door would tempt a saint.”

But creating curiosity isn’t just about invoking what’s interesting, especially if it’s only interesting to you. The curiosity that leads to action is about finding something interesting about something important to the audience you’re talking to.

Where are your messages on that curiosity curve?
What needs to happen to move them to the magic middle?
(Need help? Start here.)

The curiosity that leads to action is about finding something interesting about something important to the audience you're talking to. Click To Tweet